If I can do this, I can do anything.

"If I can do this, I can do anything."
That's the motto of Achieve Tahoe, (Formerly Disabled sports USA Far West) a wonderful adaptive sports program in the Tahoe area. I know it is meant for the participants, but it applies to me as well.

I was beside myself with nerves when we showed up last weekend for Avery's ski lesson.  I had visions of crying (me and Avery), nothing working, just an EPIC FAIL.  When we called to schedule we wanted her to be in a sit down ski (bi-ski) but they were all reserved.  We were placed on the wait list but were fourth.  She would have to have a stand up lesson.  I told the girl on the phone that I wasn't sure that would work with her balance and feeling unsteady, not to mention not being able to hold on to any thing adaptive (they told me they had a walker type thing they could try). I booked the lesson feeling very unsure.  I called Red to tell him that we couldn't get the bi-ski and his first reaction was "cancel it". I said its too late!  so we crossed our fingers, signed nolan up for a snowboarding camp and headed up to Tahoe.

We went ahead of time to rent our equipment.  Getting ski boots on Avery was tough.  But we did it and she took a few steps and seemed to be fine.  We put her regular boots back on and walked over to the ski rental section.  She started crying.  She never ever cries.  I think I had put her shoe on wrong and it hurt, but I still don't know exactly what it was.  I was hoping it wasn't an omen of more tears to come.

Back to the cabin we go to meet up with friends and have dinner.  Im a ball of nerves.  Not only for Avery but for me-I hadn't been on skis for 13 years!

The next morning, Red and Nolan got up early to get him to camp.  The rest of us slept in and ate pancakes and had coffee and enjoyed the morning. Finally it was time to get geared up.

We arrived at Achieve Tahoe about an hour early for the lesson (had to give ourselves extra time for traffic that didn't exist!). And we waited in the waiting area.  Other families started to arrive and we exchanged that knowing smile.
The "its ok I get why your kid is making weird noises and knocking stuff over" look.  We mostly got comments like: "wow she is excited!" because Avery had perma- smile and was loudly squealing. She was making me feel better about our choice for sure.

The time came and the instructors started filing in from their morning lessons. Our instructors found us, asked us if there was any thing they needed to know and literally went out and put her in her skis.
she was unsure at first. almost did the splits. looking at Kristin and Frederica like dude, what the hell are you doing to me. they took her to a spot at the base of the subway lift and started working on shuffling her feet, "walking" in skis.
red and I got ours on and watched.  we got the feeling we were being stage 5 clingers and got on the lift to take a quick run.
We got on the lift and screamed down to Goose. We were still unsure.  I was thinking "where the hell is the walker thing?" "how do they not get that she cannot ski standing up?".

We continued to ski, ending our runs with checking in with her.  She took a lot of breaks.  We asked a lot of questions.  what aren't you using more equipment?  We don't mean to try to do your jobs but....?

We were trapped in the 'wanting her to just get the quick feeling of skiing' headspace.  they had more in mind. even as her parents, who advocate for least restrictive environment, wanted more equipment! what were we doing?  it wasn't that we didn't have faith, we just didn't know what she could do. even though we literally have to convince people almost every day that she can move mountains if you just believe. It was a weird spot to be in.

Then we saw her go down a tiny portion of the bottom of the hill and I lost it. The happiest tears ever flew out of my eyes. Red got a great video of 15 seconds of her going "downhill" on her own with literally nothing but skis and boots. It was quite literally one of the top 5 moments of my life. truly.

Red had to go get nolan from the camp he was doing when her instructors told us they were going to take her up on the lift. We told them to be prepared for shaking, heavy breathing, arms going up in the air.

Kristin and Frederica got on either side of her and off they went.  I tried to ski behind them with my phone recording, I dropped a glove and had to side step up halfway to get it, but I got a video of Avery taking her first run. In only skis.

I followed them down-they fell a few times.  goose was getting tired and cold.  I went up for one more run and on my way down I ran into Nolan and Red.  I got to see nolan shred it up on his tiny snowboard. I took him on his first lift ride and we went down together.

We did something we never ever could have imagined doing. thanks to amazing people. VOLUNTEERS. amazing.

And, if we can do this-we can do ANYTHING.

Thank you Achieve Tahoe, we are already planning our next trip. 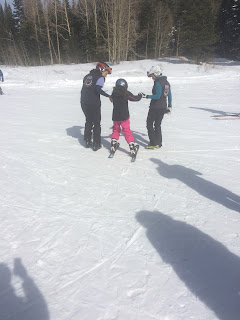 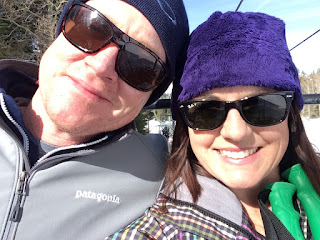 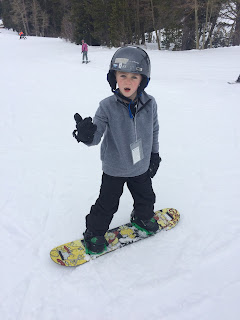