this year has just been incredible.
last night was no exception-hell, all day was fantastic.
I sent Avery to school in her disco get up-go go boots and all and hoped for the best. and it was.
Red and I went to the parade-finally just one parade to go to now that both kids are at the same school.
We are so lucky we could both be there. And Avery's smile was the best evidence of that.  she was in her glory.  they played Saturday Night Fever for her class when they walked around the blacktop. perfect. she smiled the whole way walking with her buddy Alexa and Miss Heather her aide (who is so much more than just her aide).
We snapped some pics and then we both had to head back to work.
the past few years we have been lucky enough to be invited to someone else's home for trick or treating but this year people were doing their own things and so we followed suit. We invited Reds siblings and the kids cousins over for pizza and trick or treating.  I raced home from work, stopped at the store for some last minute stuff and came home to find two happy kids ready to get candy. Avery was pumped, Nolan was counting the minutes till it got dark.  Everyone arrived and it was this awesome level of chaos as we prepared to leave the house.  We met up with our neighbors across the street and their friends and hit the street. Nolan was off and running-so independent and fearless.
Red was with Aves the whole time.  He carefully guided her up to each door-usually after the big crowd of little ones-to help her say trick or treat.  He might say to them "Avery cant talk but she sure loves candy" and honestly each one of our neighbors was so sweet. They would hold out their bowl for her to choose and then we would help her or say "oh she cant really use her hands" and grab a candy for her.  This was our first time trick or treating in our own neighborhood and we honestly dont know too many of the neighbors.  I feel like writing each one a note to thank them for how special they all made it.
We were nearing the end of the night and we approached a house. Two of the littler girls were right up at the candy bowl and were each helping themselves, again and again-and again while Avery stood behind them with Red and his mom.  Finally we said "ok girls, leave some for Avery!" and they walked off-the bowl was empty. The nice woman said "hang on honey let me get you some more choices" and came back.  She knelt down in front of Aves and said "here you go sweetie", holding out the bowl.  Avery looked at her and looked at the bowl and then bam.  She reached in and scored not one, but two pieces of candy.  she held them up triumphantly in the air as we all burst into a cheer.  It was pure magic.  The homeowners got it.  they just did.  Then Avery tried again but this time she went in too hard and knocked the entire bowl on the ground and it was hilarious.  Especially to Avery. Im so glad I had my camera and I captured the moment as she is looking at her Daddy with just a face full of joy.  She literally skipped down the steps and out onto the street ready for more. As I walked down to the street my neighbor was there and had seen the whole thing-she looked at me and said "that was incredible-I just got the chills!" and I told her I wasnt sure why I wasnt crying because it was so awesome. (Im crying now).
Avery tends to miss out on stuff because of her medications and her schedule but Im learning that there can be exceptions made and she can stay up till 9 on a school night for a special occasion and that it is totally worth it in the end.  Im so proud of her.  So proud to be her mom. 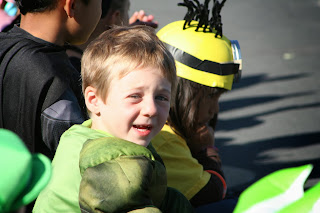 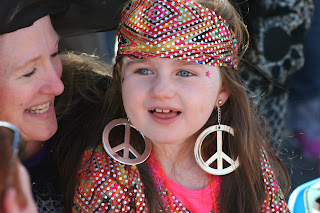 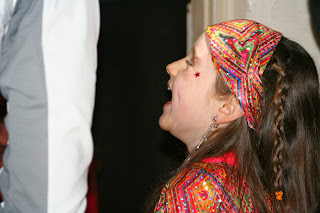 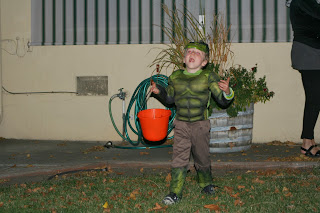 I'm so proud of you! I bet your neighbors are trying to figure out what they want to put in a thank you card to you, they were pretty lucky to get to have Avery as a trick or treater. xx

I'm proud of you both! Truly a happy halloween!!