still so much good.

Eight days have passed but it feels like a month.  Im still feeling the exhaustion and trying to get back into the swing of things.  I feel like I need to relay the good parts of our trip to Boston.  There was still so much good and it should be shared.

We flew out with Coach and Lee Ann and had a wonderful flight on Virgin America (best airline ever) with plenty of bloody marys (with gin which I higly recommend!).  We were sitting near the back of the plane and soon the bathroom line was really long. It stayed like that forever and I couldnt figure out why.  Lee Ann finally says: everyone is hydrating.  of course.  We got chatting with a man in line that was wearing last years marathon jacket and he gave us some tips. It felt like 75 % of that plane was heading to the race.  It was a cool feeling.  We took a couple photos-none of which turned out that great but I was really happy with this one only because my arm looks really skinny. 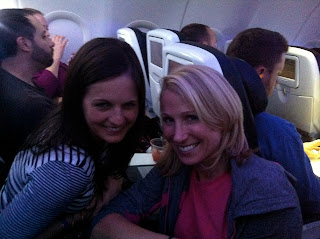 We landed some 5 hours later and got our rental car, Red and I dropped Coach and Lee Ann at their hotel downtown noticing that 1. everything looks really old there (because it is) and 2. it is still winter in Boston.  We then made our way to Natick to meet up with our hosts - Zhanna and Matt and their cute kids Rachael (who also has Rett) and Jacob.  A few months ago when I was trying to make plans for our trip I texted her to see if she knew of any rental properties we could try out for the weekend.  The hotels were out of control expensive.  Without delay she wrote back "dont be silly, you're staying with us".  Zhanna and I have known each other for a few years but had only met in person once.  This would be my second time seeing her. Ever.  And she invited me and Red to stay in their home.  It was so sweet. I was very excited to get to hang out with her a bit more and especially to meet her husband and kids.  It couldnt have been more comfortable when we got there.  The kids were already sleeping and the sitter was ready to take over.  We dropped our bags in our room and found this... 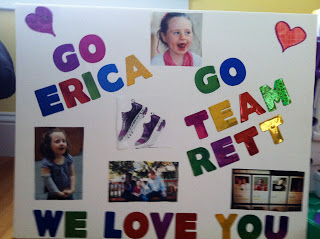 Of course I cried.  How sweet.

We shared a glass of wine and then headed out for dinner. We met Zenaida and her sister Hilda there as well as Laura and Greg (parents to Meredith who has Rett variant called FOXG1).  Laura and I had also known each other for a few years and only met once.  But with other Rett parents sometimes things just click so well it feels like you have known each other since grade school.

We had such a great dinner.  Delicious food at The Cottage in Wellesley and great company.  All the boys sat together and talked and the girls did the same. We paused for a group photo. 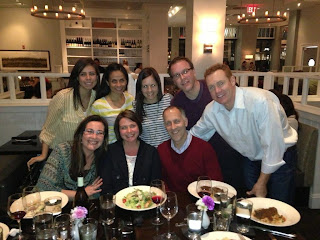 After dinner we headed back to Zhanna and Matt's.  I was wired and wanted to stay up all night and chat but sure enough we all got tired and I begrudgingly went to bed.  Red and I stayed in the playroom surrounded by the kids toys-it was perfect.  We both secretly love futons so it suited us just right.  When I woke up in the morning I could see some activity in the hall.  Rachael, who is about 6 months younger than Avery, was going in and out of her brothers room and even without my contacts in I could tell she was eying us.  Her gears were turning-who is that sleeping in my playroom!??  So after a couple more glances our way she walked up and tapped the door open-just like Avery would do. She walked over to us in her bed head and cute jammies with the biggest smile on her face and said HI!

It was the perfect way to wake up.  We made our way downstairs had coffee and met Jacob who is too cute for words. He showed us every single toy he had.  It was adorable.  We decided to go for brunch at a fantastic place called Zaftigs.  It was great.  The best part was watching Rachael use her fork to completely feed herself.  It was incredible.  She is so quick and so good at it.  Jacob sat in between me and Red and was adorable.


After the meal we headed towards the Expo on the race route-got a good idea of what miles 11-26.2 would be like. At first it seemed not so bad, then I got some butterflies.  Before I knew it we were in Boston.  Zhanna, Rachael and I went in to the convention center together while the boys found a place to park and wait. As soon as we walked in to the Expo and I could feel the energy of all those people I realized I left my packet pickup stuff at Zhanna's.  Whoops.  Rookie mistake.  Lucky for me they have a "solution center" for rookies like me.  I walked over to the solution room, they checked my ID and I got my "replacement stuff".  Then we got my bib and bag of goodies and got out of there. But not before we documented the moment.  I was kind of sad I didnt get a photo in the solution center. 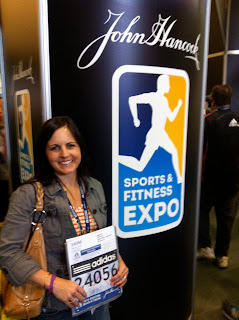 After a quick stop at Starbucks, we headed to Needham for the get together at Maria's.  Maria is on the board at RSAM (the organization for which we raised all that money) and a Rett mom.  She might be the most gracious and nicest woman on the planet.  She opened her home to the entire team and their families plus local families to mingle, eat and hear from the MIT researcher.  She even allowed Micaela, the BU student who contacted me about doing a story on me, into her home.  I got to see many familiar faces and this one in particular that I have been waiting literally years to see: 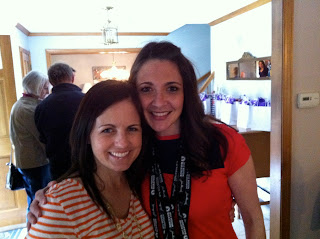 We all introduced ourselves and why we were running and how many marathons we have done.  A couple of first timers, several multiple timers and one man who has done over 88.  He actually said he lost count. So impressive.

Micaela got us outside and interviewed us for the piece I posted once we returned.  She was so sweet to seek out a story that moved her and I felt really lucky that she found mine. She took this photo after we talked: 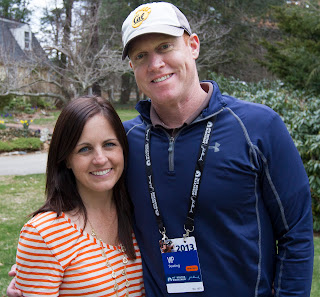 Maria was so sweet and had a goodie bag for each of us.  In it was an awesome SPIbelt (running belt with a pocket), gels and a 26.2 magnet.  How thoughtful.  We also got our singlets, finish line passes and temporary tattoos for race day. What a wonderful thing to bring us all together and get to meet Dr Li.  She was just as overwhelmed as we were, she explained, because she had nver met a girl with Rett syndrome till that day.  I can imagine it gave her work so much more meaning.

We left there and headed back to Zhanna and Matt's.  Red was looking forward to watching the Masters and we stopped at the gas station to get some beers.  Umm, no beer.  Then we hit the grocery store b/c I needed a few things anyway and hmmm, no beer there either. Coming from California where you can buy hard liquor at the Safeway we were confused.  I grabbed some groceries and then we headed to the liquor store.  Just in time too b/c not only do they only sell alcohol in the liquor store but only till 6pm!

We hung out with the kids for a bit and all day long it was the same thing-Rachael was drawn to Red.  It was the sweetest.  She would crawl up on the couch next to him.  She patted his back.  She smiled and said HI! It was precious. 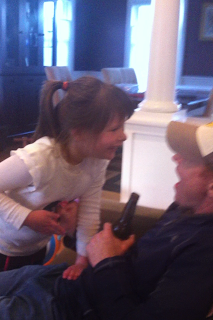 We had a lovely dinner in with Zhanna and Matt.  We chatted and talked about how nutty it was that we "knew" each other online for years, finally met in person, Rachael gets a Rett diagnosis too and that we were in their house like we had known each  other for years.  It is a pretty neat story.  I love when life turns out like that.  We went up to bed and I got my stuff ready for the next morning. 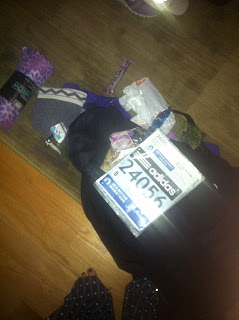 Then I went to bed.  I think I slept.  Im not too sure.
Morning came and it was gorgeous. Crisp and blue and perfect.  Maria and Zenaida came to pick me up at 6:30 am and off we went.  The rest of the story you already know.  But it is all the good-great friends (old and new), smiling kids, researchers, generous people, kindness and love-that I want to remember. It is indeed hard to forget.

Definitely unforgettable. So great to hug you after two years. So great.