what's the occasion? um, we met online. it's not what you think.... 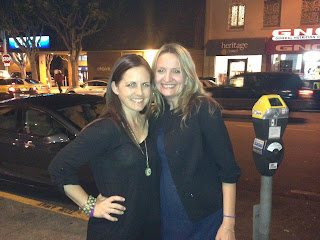 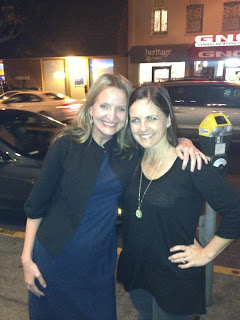 A couple weeks ago I got a text from this lovely lady. Said she would be in the area for a one day business trip and asked if I could possibly meet her in SF for dinner on the 22nd??--ummm yes!! I left work and headed straight to the city to meet up with her-another friend, that up until Friday night, I had never met in person but had known for years. Exactly three years-we had exchanged our first messages on a message board for parents of delayed children back in February 2010.     Over the years we have gotten to know each other through our blogs, then on facebook.  It seems so weird to "meet" someone online and then become friends.  But when you find another mom that is going on a journey so similar to yours and you find that you have much in common and realize you would definitely have been friends-but never would have met otherwise-it just feels kind of normal.

I was already at the bar when she pulled up in the taxi-she saw me through the window and we waved at each other like old friends who havent seen each other in a long time would. But we had never seen each other in real life.  I ended up going out to meet her because the card machine had broken in her taxi so we walked to get money out of the ATM. We were laughing and eye rolling in seconds. It was literally like we had hung out a hundred times.  We went back in and had a drink, then got some food and talked and talked.  We didnt have too much time to hang because she had to catch a flight back to LA.  But I had planned to drive her to the airport so we got a little more time to chat.  We got a lot covered in that short time and made sure to get a few (several) pictures before we left.

It was a good night.  A really good night and I so hope that she has to come up here for work many more times and for more than just a few hours!

seems like forever ago...and just yesterday.  that was my brother's comment when I posted on his facebook page today that tomorrow our mom will have been gone for 6 years.  he nailed it.

6 years is a long time.  so so much has happened in the last 6 years.  for starters, Avery was only 8 months old when my mom died. 8 months. just a fat happy baby. we had our second child who will be starting transitional kindergarten in August. we had Rett syndrome enter our lives, I have found my place in the working world and have become a runner.  So much has changed.  But it certainly does still feel like yesterday.

Sometimes I still cant believe that she is gone.  Red asked me the other day how often I think about her and I told him every single day.  and thats the truth.  I literally think about her EVERY day. mostly it is a fleeting thought and other times its a punch in the stomach.  Usually it is something bittersweet like when I was watching Les Miserables (the movie) recently and I knew how much she would have loved it and how she would have called me to tell me about it before I ever saw the trailer and she would have seen it way before I had a chance to and would have said "Oh Erica, you HAVE to see this film!" I miss talking to her about that stuff.

I do feel like she is with me.  I see her in myself and in my kids. Avery reminds me so much of her not only in appearance but in her mannerisms. She walks with a purpose sometimes that only my mom had. She even has the same hairline.

The other day I was looking for some old bill or statement and came across all the sympathy cards we received when she passed.  I kept them all.  I started reading them and 45 minutes laster sat there with a smile in a puddle of tears. it is so clear from reading those notes that she was so loved, respected, admired and appreciated.  she lived a wonderful life despite all the hardships she had growing up. she was a wonderful mom and I am so grateful that she was mine. i miss her.
Posted by Erica at 11:16 PM 1 comment:

Who have I become?

I'm now that girl who travels to races?  Exercise on vacation? Flying to San Diego for one night to run a half marathon? really?

Lee Ann's mother in law suggested we try this race-we could stay with them because the race starts right down the street from their house, literally.  So a cheap southwest flight later the trip was booked.  I had really no intentions of doing another half between Healdsburg and Boston but I felt pretty confident about it now that I had my first under my belt. And I wanted to see if I could beat my 2:34:59.

The week before I did a 12.5 mile run and felt good with my 2:18 time.  I was pumped to try to do really well in San Diego.  I wasn't expecting the hills. They were killer.  And I was slightly hungover.

I arrived the day before the race because I couldnt leave Friday (it was a clinic day).  Lee Ann and Julie picked me up at the airport and we went straight to Road Runner Sports where bibs could be picked up.   There was some confusion about the times on the stores part, so we ended up just shopping a little.  Stocked up on shot blocks, got a Garmin watch (very beginner and very pink), and new socks. Then we headed to La Jolla. My friend and fellow Rett mom Jen was able to drive in and meet us for an amazing lunch at George's at the Cove.  We ate some amazing food on the terrace with the most gorgeous view of the ocean. But the cocktails! I am super into Basil Gimlets these days and not that many people are able to say "sure, we can do that" when I order one. But this place was top notch so they made it work and they made two of the most delicious basil gimlets ever.  The weather was a little off, partly cloudy, slightly chilly and it even drizzled. But no one minded because we were on vacation! In La Jolla!  We were offered blankets that were white and clean and warm and the umbrellas were opened as soon as the first tiny drops fell.

After lunch we window shopped and then found our way to a bar. More basil gimlets! Even talked a couple into trying them-she preferred mint and he loved the basil.  We got to talking with them and shared a little about Rett.  He bought us our drinks.  So nice.  Then it gets fuzzy. I know it was fun though.  We had a lovely dinner back at Lee Ann's in laws.  We hot tubbed.  I had one more drink.  And then was in bed by 10 with a killer headache.

I woke up and felt pretty bad.  Somehow I managed some coffee, gatorade, a bit of a banana and some bagel. And by the time we walked down the driveway and a short road to the start, I felt much better. And then we were off.

I have got to figure out a better way to carry all the stuff I need with me on these races because right before mile 1 I was already stopped taking off my jacket, rearranging my headphones and music and just plain wasting time. From there until about mile 6 it was a blur.  Hills.  Downhills that I knew would turn into uphills. I was going pretty slow.  But felt good. Then a police car was behind me and passed with lights on.  Then I heard an ambulance.  Then I realized I was going to pass by whatever had attracted the cops and ambulance.  And when I saw it, I was completely traumatized. An older gentleman had fallen, I assume, and was bleeding from his face and head.  A lot.  I had to pass him twice because he was just before the turnaround point.  When I came back by, he was on a stretcher.  According to the race's facebook page he is doing ok.

The turnaround was at approximately 7.7 miles and I was happy to know I was more than halfway there. And that is when I got my groove.  Lots of downhills after that and I was catching people that had always been just too far in the distance to catch. 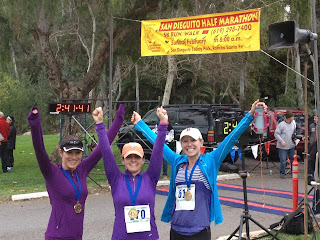 Lee Ann came to get me at around mile 11 and ran in with me (she had finished 8th in our age group with a 1:44!) I was checking my watch like crazy and knew I would beat my Healdsburg time.  We were cruising easily.  Then the last .7 was looming.  A long, gradual, nasty mean old hill. It messed with my mind.  But I did it.  I beat my time!  By 3:02--with a slight hangover. 2:31:57 is my new Personal Best! It felt amazing. I thoroughly enjoyed this race until I realized I have to double that in about 8 weeks.

We picked up our shirts and then grabbed some chili which was perfect for the now steady light drizzle.  Back to the hot tub.


Then my good friend Lindsay came to meet us!  She drove about an hour to get there, had lunch with us and then took us downtown.  Lee Ann and Julie had massages booked so Lindsay and I went to get coffee and catch up.  It has been like 6 years since we last saw each other in person but felt like just last week.  I love that.  It was so good to see her and to use our old sayings and to just fall back into that easy friend groove. The girls came back and we shared a delicious dinner and then Lindsay sweetly took us to the airport.  She had a long drive ahead of her and it was so awesome of her to do that! 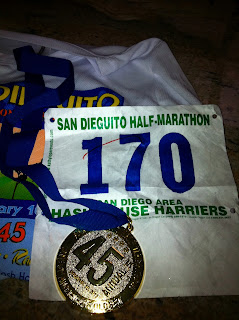 And just like that I became that girl who travels to races. And I can't wait to do it again!
Posted by Erica at 10:57 PM 1 comment: