It was likely the hardest task I have ever completed in my life.

There were 18 (friends of mine and friends of friends) of us on Team Boston or Bust.  12 of us stayed in two rental homes on a gorgeous property just outside of downtown Healdsburg (which might be the cutest town ever) and I stayed with 5 of those girls in one of those houses. Many of us had trained together-some had completed several races (full and half marathons) and some were first timers like me. We thought about getting team shirts but never did-I had created a shirt months prior but never ordered them-little did I know two of the girls bought me the shirt.  The front said boston or bust-and on the back chasing the cure for rett syndrome www.rettsyndrome.org.

We arrived on Friday and our house had reservations for dinner at Scopa in Healdsburg.  It was delicious.  We had pasta, pasta, chicken and more pasta.  We stayed up too late but set our alarms and went to bed. We woke up Saturday at the crack of dawn (aka the middle of the night-stars were still out!) to drive to the tour bus stop that would take us to the start of the race in Geyserville.  As we waited in line for the bus to arrive we met up with some of the other girls and chatted.  Mostly about how nervous most of us were, or excited.  The nervous ones were getting encouraged by the seasoned runners. There were costumes all around.  It was a bizarre feeling. Standing in the dark, cold and just plain nervous with lots of grown ups wearing tutus.  I would have taken pictures but I was so worried my phone would die seeing that I had to run forEVER.

We got to the start and wandered around.  We met up with some more of the crew and waited.  The announcer asked who was running their first half marathon and I raised my hand so high-I was pretty proud of myself for just being there.  The sun had come up by this time and it was looking like a gorgeous day.  Before I knew it, the race started and we were off.

It was just beautiful.  We all ran our own race.  I stuck close to my friend Sarah (who has never run more than 6 miles and was as nervous as I was--she finished way before me by the way!) but spent a lot of the time alone.  I had to remind myself to look around and take in the scenery--Not only the vineyards but plenty of hilarious and creative costumes.

It is a wonderful feeling to be around perfect strangers who will cheer you on if they see you struggling.  It is one of the most supportive environments to be in.

Around mile 8, I hear someone behind me say "hey, what's rett syndrome?" I look to my left and a woman comes up next to me with a genuine interest showing on her face.  I was so caught off guard I just said "its a neurological disorder-my daughter has it-they are close to a cure-im running the boston marathon in April on Team Rett-if I make it through today!"  she placed her hand on my back and said: "this is nothing compared to what you do every day" smiled the sweetest smile, and ran off.  pretty cool.

I thought a lot about Avery around miles 9 and 10 as my legs were starting to yell at me and my toes were going numb.  I thought of how hard she tries just to do the little things we take for granted.  And that yes she can walk and even run but she will likely never run a race.  I realized that yes, there were a LOT of people there running with me-but there were even more that weren't there.  And that just being there was really enough. That I was lucky to be there.

Then I hit mile 11 and thought "you can do this-two more miles-dont stop" but I kept stopping and walking.  I could only run about a tenth of a mile at a time. I was getting the chills, despite the morning sun blaring down on me. I was dehydrated and exhausted.  I was thinking about having to run twice as far in 6 short months.  I was thinking about the finish time I had figured I might make-and when I passed that I was pretty defeated. I was mad at myself for even setting an expectation for a time.  At miles 12 I told myself to run without stopping to the finish and I couldnt. I walked.  I was texting my friends to go to brunch without me-but at 12.7ish, there they were-cheering me on. I gave them a double thumbs down-but they just smiled and clapped and cheered. I was back to running at that point-I could feel the finish coming up.  Two girls ran past me and one of them screamed "Mile 13 is my bitch!" and that made me smile. I could see the 13 mile marker, and I couldnt feel my face, or my feet.  My legs were so tight and my fingers puffy.  My 2.2 hour playlist had just started to repeat. I could now hear the announcer reading names, I looked down as I crossed the finish line because I was so overcome with emotion and all I could see was the photographer snapping away-and I was doing the ugly cry.  I never heard my name.  I grabbed my finishers medal and saw Sarah with a huge cup of water for me. I hugged her and chugged.

I ate an apple.  It was the best apple I have ever had in my life.  I got so many hugs.  I searched for water, found it and drank a ton. We got to have a free brunch thanks to Anne who has a Subaru (major sponsor of the race). Everyone did awesome.  One of us might have come in 6th place in her age group. One of us might have puked-and then rallied.  We all felt proud of each other and ourselves.  We cheered on those who finished one hour after I did.

We went back to the house and popped the champagne,  got on our suits and laid in the california wine country sunshine.  We hot tubbed.  We got a second wind, got dressed and went downtown. Found a fancy pizza place and watched the Giants game during an early dinner.  We went back to the house to finish the game and then were all in bed before 11.

We woke up sore and exhausted.  But we did it. Together.
Im so lucky to have such great friends. thank you ladies!  All of you!  Im so proud to to know you all! 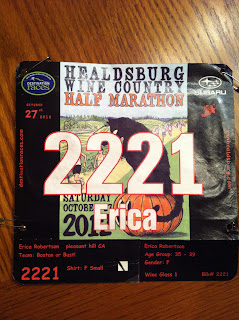 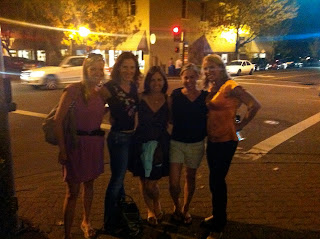 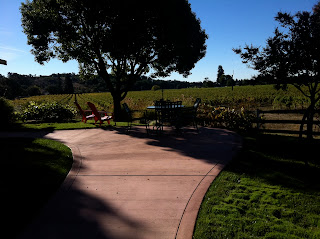 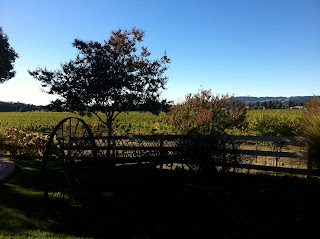 EEEEEEEEK! I'm just giddy. Giddy. I can't stop smiling. I remember meeting you in 2010 and you said you would NEVER run and I knew you would. Yay! Yay! Yay! I'm so proud of you and can't wait to cross that finish line in Boston by your side in 2013. Hip hip!

Hi Erica - I knew Red in college, and found your blog through Ali Palmer a while back. I have been following along with your family and thought it was time I say hi.

I think you're amazing!

I run a lot of marathons and I will be at Boston in 2013, too. You totally got this! And you will love Boston, it's absolutely the one to run. I would love to share the link to your donation page on my blog (http://twofiftynine.blogspot.com - check it out, so I'm less of a random creeper on your blog) if that's ok? My email is rachelshapland at gmail - let me know. :)

PS. I get a 404 error page not found when I try to donate on your Boston page. I will try again later, though. It lets me enter the amount, etc, then waits around a while, then won't go through.