A little over 2 and a half years ago, soon after Avery was diagnosed, I had something like a vision.  I have told the story before but it bears repeating-especially now.  During those first few weeks and months I would sometimes wake out of a deep sleep and think "Avery has Rett syndrome?" I couldn't quite wrap my head around those words.  On one particular night that very thing happened just as I was drifting off to sleep.  And maybe it was that in between awake and asleep when I saw her.  I saw Avery in the future.  I saw her as a pre teen.  I saw her without Rett syndrome.

I cannot be sure what it was that made her "without Rett" but I just knew she was.  I just knew.

After this weekend I KNOW it WILL.

This weekend I had the privilege of attending the 7th World Rett Syndrome Congress in New Orleans.  Im not sure it is possible to even convey what I felt while there. There was a lot of hugging and laughing and meeting and toasting and even a few birthday candles.  There were standing ovations and tears of joy.  There were other tears too...tears of regret or feeling like a failure-which quickly turned into being inspired to change things. There were more hugs and some drinks and lots of food.  There were moments when I felt unbelievably lucky and fortunate and loved and supported.  There were many "hey arent we facebook friends?" and "I love your blog!".  I got to see some moms that I rarely get to see and have only known for 2 years or so but it feels like it has been a lifetime.  We are all different but so connected by our girls. Nearly everywhere you went, you saw a Rett family.  Many many girls were in attendance and they were so loved on by everyone.  All highlights.

But the winning moments?


"my pledge to you, it will be done fast" 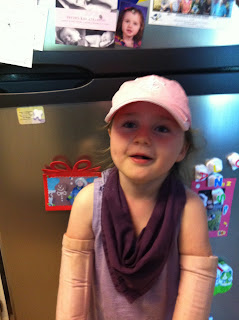 I can't even begin to describe what it means for that vision of Avery without Rett (or with less Rett) to get clearer.  Avery is pumped.

I had a vision too!!!!!! Oh my goodness Erica!! I have been stumped about what to write today but now I know...and I'm going to send people here so we can either back each other up or both look bonkers! I wish I'd been at the conference...that you for writing about it so well that in a small way I feel like I was :)

you did? a vague but compelling vision? love it and cannot wait to read about it! I wish you had been there too and am glad I could make you feel a bit like you were! have you seen Janie's slideshow yet? fantastic!

Beautiful writing! Thank you for sharing. I wish I had been able to attend, but with a 8 month old and 3 year old, it was cost prohibitive. I WILL be at the next conference! Lots of love and look forward to meeting you!