We thought for sure Nolan would make a trip to the ER before he turned 3, but he waited till two days after christmas (age 3 years 2 months).  Remember that trampoline that Santa brought?  He took a little tumble off of it at around 4:30 on Tuesday the 27th.  He came running to me crying saying he hit his head.  I picked him up and put my hand where he said he hit it....and it was wet.  with blood.  I freaked a little.  Called Red.  Luckily he was 5 minutes away and came right home.  We all piled in the car and took him to the ER.  Red went in with him to get him checked in.  I took the car and Avery to park.  We went in after a while and waited with Nolan while Red went with Avery to get food.  Nolan looked so funny after being seen by triage and was having a good time.  We had pretty much told him he would need stitches or staples and told him both of our own staple stories. (Red had 4 in his head and I had countless after both C-sections). 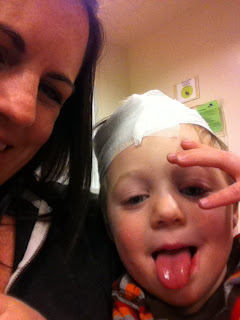 Then gramma came to wait with us.  We got called back.  We waited some more.  The sweet nurse came in and told us we would have to wait some more because they were very busy.  But, it didnt look anything like the Grey's Anatomy ER!  No one was running!  There were barely any people there!

So we finally see the Dr and he confirms that he will need staples.  Then he tells Nolan that the novocaine shots will feel like bee stings.  Nolan is still being brave.  He did try to escape a few times saying he was done and his boo boo was healing up. We try to hold him down for the shots but between me and gramma we cant keep him still enough.  The nurse comes in and for a few minutes Nolan SCREAMS bloody murder.  But then the novocaine takes effect and he doesnt even flinch for the staples.

Red took him today to get his staples out and he didnt even cry!  Got two stickers and was such a champ.  Here he is once he got back with less hardware in his scalp.  A few minutes later he said "mommy, i need a peanut butter cup because I was so brave!"  He got one. 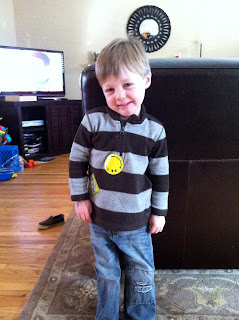 What a brave little guy. At least the first staples out of the way. He's a boy, it was bound to happen sooner or later. Logan turns 3 this week, so I'm sure we have a trip in our near future. He got roller skates for Christmas that might land him in the ER soon.