Im sort of afraid to jinx it, but I feel we very well could be turning something of a corner with Avery these days.  It might be that Im still recovering from a very relaxing weekend in Vegas with great friends-but I think she is really a little different.  Maybe she is tired.  I hope it lasts whatever it is.

Yesterday was one of those days that I was dreading.  I had to be at two Halloween parades within 30 minutes of each other and get treats to both Nolan and Avery's classrooms.  I stayed at nolan's school and waited till the parade started.  I watched him in his little pizza costume the class made and then waited to get some pictures at the end.  It was almost 10 and I was so afraid I would miss Avery in her parade. I made it over to her school at around 10:08 and just as I got to the upper playground, I heard her class being called out.  I did get to see her parading with her aide.  She didnt see me though but I think it was better that way because she might have gotten upset.  I fugured out where her class was sitting and made my way over there.  This parade was intense.  Like 100% participation.  Even the teachers went all out.  One dude was on stilts!

I got to meet Avery's wonderful aide and heard that Avery had been having a great day.  She was tolerating her batgirl mask and everything.  I got to join the class after the parade for some treats and see some of the classroom action.  Avery has her own little spot in the classroom with a fantastic chair that was ordered just for her.  I saw her working on some things and she was getting it all right! Then I heard she used the potty in the morning!  Then I saw her use her step by step button to talk to her friends.  It was awesome.

But I was still a little nervous for the Halloween party we were planning to go to.  Last year, we had to take Avery to gramma's after it became clear she was not going to last at the party long enough to trick or treat. She was screaming a lot and hitting little kids trying to get their food/candy.  I didn't even blog about it.  I posted pictures but had nothing to say.

We get together with the same people every year but rotate houses-this year there would be some new families that we didnt know and a ton of kids.  I was sure it would send Avery over the edge.  But she was good.  She was awesome.  She was quiet.  She ate her food and didnt knock any thing over.  She smiled and giggled.  She got excited when we said it was time to trick or treat.  She loved trick or treating.  She held my hand and laughed and more than once put her head IN the candy bowl.  I felt like a "typical" mom.  It was magical.  Nolan was running up ahead taking as much candy as he could from every house.  He loved it but we need to work on his manners for sure!  It was a great time.  I kept leaning down to tell Avery "Im so proud of you, sissy.  You are doing so great!" and she would just smile and march on down the road.  We got back to our friends house, had a few bites of candy and went home.  As I was putting her to bed-waterworks.  I couldnt help it.  She was so good and made me feel so much like a regular mom.  And I just lost it.  Those are the best kinds of cries.  I was so happy for her, and for us.
Today has been a pretty great day too.  And Ill leave it at that...with some photos. 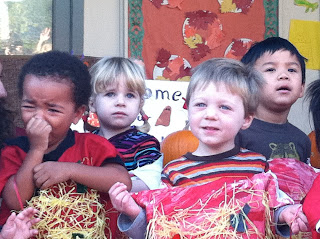 nolan at school parade.  his class went as pizza! 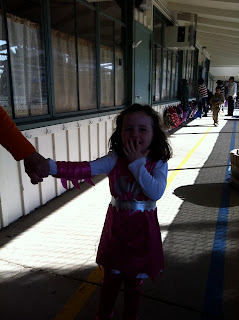 Avery as batgirl at her school 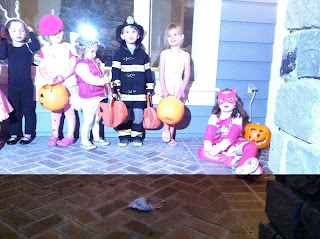 Avery and some of her friends just before trick or treating! 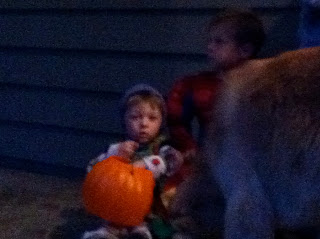 Nolan pre trick or treating. I know I need a better camera. 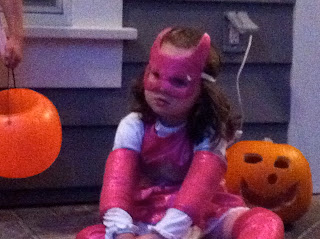 Can we get a move on? 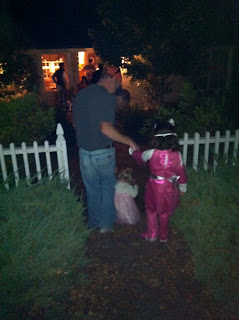 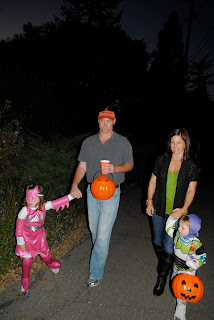