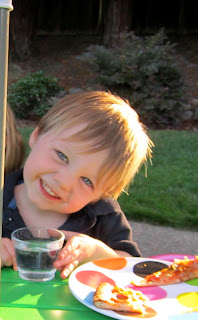 Because the Strollathon coincides with the Natural History Study, we don't get to pick the date.  This year it happened to fall on Nolan's 3rd birthday.

I was a tiny bit concerned about this-only because ever since the day after his 2nd birthday, Nolan has been talking about his 3rd.

I talked to him about it a few times letting him know that on his actual birthday we would be going to the Strollathon for sissy but that we would have a party just for him the week after his real birthday.

So the big day came-we gave him a couple little presents when he woke up so he fully knew it was his birthday.  And lucky for him the Strollathon (or Stroll-a-Fon as he pronounces it) was like a huge party!  He was a little bummed when he heard there was no bounce house though.  He had a fantastic day-face paint, tattoos, popcorn, slushies and cotton candy.  What more could he ask for? (besides a bounce house of course).

But the best part was that he totally knew it was his sissy's day.  And he was cool with it.  And Im so proud of him for that.  Im so proud of the brother he is to her.  He is more like a big brother now, which makes me proud and sad all at the same time.  But he is so good to Avery and loves her so much-doesnt even flinch when she screams.

So, Nolan is 3.  A funny, sweet and sometimes wise beyond his years, 3 year old dancing fool.  My Nolies.

Nolies-I love it. Avery is blessed to have such a sweet little brother. He definitely has moves-His dancing videos always entertain. Happy Birthday Nolan!