where everybody knows your name

it hit me in the security line. terminal 2. SFO. i shouldnt be this excited. i shouldnt be taking this trip. avery shouldnt have rett syndrome.
oh, but she does.
and i was taking the trip.
and i was excited. right?
sort of.
anyway. i found my travel partner, the trusty colleen. we got a cocktail ( a double for me) and marveled at the really fabulous new terminal. we heard about the waitresses bad night. then we told her where we were headed and why. she felt bad. we laughed to make her feel better. we laughed to make ourselves feel better. we cried a little too.
5 sleepless hours later we arrive in boston. the airport is confusing when very tired and much in need of a coffee (or four). who cares if we missed the stop at the subway station the first time? got it the second time around. the subway was humid. but only $2.
i was crabby when we got to the park plaza. we found maren in the lobby-fresh off her two week europe trip! once i got some coffee and food i turned it around. went up to my room and tried to nap. i was unsuccessful.
but, i had to be downstairs to get the shuttle to what was the highlight of the weekend for me. the tour of the lab at boston children's where amazing research is happening, and where the IGF1 trial is being held. we saw the lab, met the principal researchers, saw post doc students in darkened rooms using nobel prize winning machines to look at neurons and cells and to try to fix rett. with each new face i came much closer to saying "thank you", but i feared i might fall into a heap of tears on the floor. so i said nothing more than wow-about a zillion times. i am so thankful to the people doing this work. i just dont have words for it.
Catriona-from LONDON (or is it Britain, or the UK or England?) joined us next. we found ann marie, dr. mary, vicky and our new friend angie-had "tea" in the hotel restaurant. many more old friends arrived. lots of hugging. and the rest of the weekend is kind of a blur.
i know i learned a lot:
that we are much more capable than we think from our keynote speaker, dick hoyt of team hoyt.
that our girls are much more capable than we think.
that we need to MODEL whatever type of communication we want our girls to use.
that it just takes thinking out of the box.
that siblings can, and do, feel the pressure to be perfect.
that there is a ton of hope-that research is moving, and moving fast.
that its possible there will be a viable treatment for many symptoms in the next few years.
that boston is beautiful, clean and the people there are super nice.
(and that its really humid pretty much anywhere after living in ca for so long)
that its really cool to meet someone online because your kids have delays, and then 2 years later meet them in person, and find them to be just as awesome as you thought they were.
and i was reminded that even though this is not what we wanted for our life, we couldn't be in better company. my rett family-these moms and dads and the staff at irsf-make this whole thing somehow ok. even if just for a weekend or a day or a moment. i would need to use all my fingers and toes to count the people that would be there for me if i called with good news, or especially bad news.
im so thankful to irsf for being there for us. for giving us knowledge and empowering us to be better parents. im thankful they give us an opportunity once a year to come together and learn and lean on and laugh and cry. where everybody knows your name. 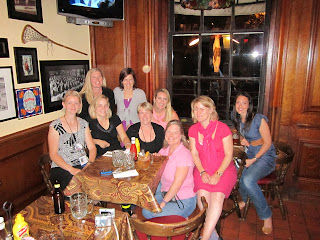 So very well put! I can completely understand not being able to say "thank-you" out loud...I can't even think it (even sitting here in my computer chair, much less seeing one of them face-to-face!) without crying. I do wish I could have been there to get some of that inspiration and share in the love! I can't wait for the day we are able to have "reunion conferences" for all of us that "used to" have Rett syndrome as a part of our lives! Love and hugs my friend!

I love you, even when on a humid subway pre-coffee, so glad to have you to travel with, literally and metophorically.

Hey Erica,
I wish I had my shiz together - I would have come meet you guys in Boston!! (I live an hour outside the city). Anyways, sounds like such an interesting week/weekend. So encouraging hearing about all the progress being made with research and treatment for Rett. Amazing really. Glad you had a nice trip and thanks for saying people in Boston were friendly - we don't get that a lot, lol!