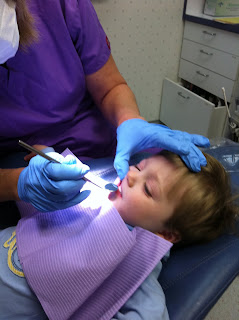 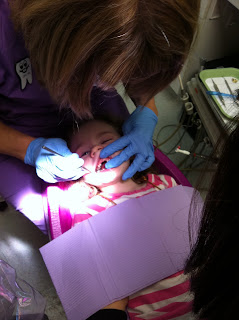 It's taken me a loooooong time to really grasp the meaning of irony. Alanis Morissette really screwed it up for my generation with her song about it-but what she was actually singing about was really just murphy's law. It should have been called "Crappy" or "Sucky"-as in "like meeting the man of my dreams and meeting his beautiful wife-isnt that crappy? dont ya think?"
But irony is something else. It is still a lot of things I don't really understand, but one definition I get: an outcome of events contrary to what was or might have been expected.
Rett moms know irony. Because a lot of the time what we think might happen, actually turns out to be the opposite. Like this morning. Both kids had a dentist appointment. Avery is almost 5 and has never had her teeth cleaned. She has been to the dentist just never made it past the "happy visit" where they just sit you in the chair and show you the tools. She is already missing three teeth-two were knocked loose and out from falls. The third fell out last night-this time a bottom tooth and the Dentist said it looked like it really fell out because it was ready.
I made the appointment a few weeks ago -as of Jan 1 we finally have dental insurance, but had been dreading it ever since. I almost canceled. Even though they take kids with special needs and I had heard such wonderful things I was still freaked out. Lucky we have Avery's behavioral therapist and she came along. I arrived a few minutes prior so was on my own for a few minutes. They had me fill out forms that I had ready to turn in-but then of course I had to fill out some more. Avery was yelling by then already. We get called back right away and Im nervous because Kaitlyn hadnt arrived yet. Im sure Avery picked up on that and she got worse. We are in a tiny room and the hygienist is asking me questions that are ALREADY ON THE FORMS! Dont you hate that?
I see Kaitlyn come in and then ahhhhhhhh. The morning got better.
Nolan went first and was a total champ. She said no 2 year olds are that good! I was very proud of him!
We then got geared up for Avery. They had her sit in my lap facing me and then I layed her back onto a pad that was on the hygienists lap. She sat still. I held her arms but didn't really need to. She didn't cry, or scream. I think she might have bit the poor woman a few times but nothing too bad. Then the dentist came in. She is awesome. I could just tell right away. Then she told me she also has a child with special needs. She has 3 kids and one on the way. She is a rockstar. She said both kids teeth looked great. And that was it. We got our prizes, new brushes and balloons and then left. After I paid $341 (insurance? only covered $100!) but that is just fine because it was IRONIC. The exact opposite of what I expected actually happened.
Posted by Erica at 4:12 PM

I just love this!

WOOOO-HOOOO for this kind of irony! Congrats!

i will forever sing, "and isn't it crappy - don't you think?" because of you.

three cheers for nolan, avery, ERICA and a little bit of insurance!

by the way it was like Rain on my wedding day..., remember?

Yes, irony definitely has an entirely different meaning now! I love that they both had a such a great dentist visit...great job!