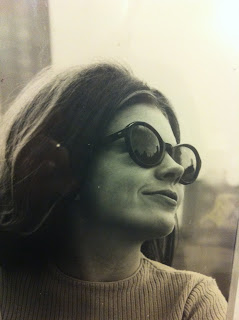 I just suddenly realized it was four years ago this past Sunday that I last saw my mom alive. I'll never forget looking back at her to say goodbye, knowing it would very likely be the last time I saw her.
That moment is forever etched in my mind. She sat with a crooked smile on her face, her frail body barely holding her up as she sat on the side of her in-home hospital bed. She waved limply to me as I left my brother's home-the one he had to buy so that she could move in with them. She was smiling, even though her facial muscles were failing her.
A few weeks prior, my brother called me and said "you should probably come see mom". I knew why. I knew that day would come but still I was unprepared to hear him say that. I was 32 years old. Too young to be realizing my mom would soon die.
I had been out to visit her just three months before that. I flew across country with Avery on my lap to see my mom, my brother and his family and my grandma (moms mom). What a difference those short months had made. It was October 2006 and she could still eat by mouth, though she was beginning to have trouble with that. By December she had a feeding tube. Something she said she would NEVER do. In January I was pouring Ensure into a large syringe connected to a tube in my mom's stomach so she could eat.
I spent a little less than a week there-alone this time-so I could just hang out with her, tell her how much she meant to me and how much I would miss her. But death is a strange thing to discuss with a person who is dying. Especially when that person is your mom. So, I sat next to her in her bed and we watched TV. We chatted a bit about what she wanted her service to be like-what music to play etc. and where she wanted her ashes spread. She had to write it all down because she could no longer speak at that time. We went through her costume and real jewelry, "is this any good?". We laughed a little because even though she couldnt speak, she was just as critical as ever-pointing to my baby weight and pretty much saying I needed to work out. She was right.
I struggled to tell her how I felt. I didn't want to cry and didn't want her to either. Maybe I wanted her to know we would be ok without her. Maybe I was just a big chicken. I dont remember exactly what I said-but I know I didnt even come close to telling her what I wanted to say. I had the chance to do it and I didnt. Im sure she knew. I hope she did.
Less than a month later, I received another call from my brother. It was a Sunday night. He said mom was having trouble breathing and seemed scared. She was on oxygen by then and we decided (with guidance from hospice) that it was time to take her off and let her go. He said it may take a while. I don't know why it didnt occur to me to have him put the phone to her ear and let me tell her goodbye and that I loved her one last time. It didnt occur to me. at all! And Ill always regret it. Not something that you can really prepare for I guess. I heard from him again the next morning-and she had passed away. It was a holiday that day-so Red was home with me luckily. I had to then call my grandma (her mom) and tell her. Thats another moment Ill never forget. It's not the way it is supposed to happen.
Im so angry that my mom had to get ALS. That it robbed her of speech, the ability to eat (two things she loved to do: talk and eat!) and finally of her life-way too early at the age of 63. But she loved me and my brother-she saw us grow up, get married and have our first children. That makes me happy. But I still need her. I want her here. I want her back. I want to be writing this post because she is annoying me and trying to control everything-especially where Avery is concerned. I know she would be all over it. She would think we weren't doing enough, and it's too bad that it takes her dying for me to realize that all the annoying things she did and said were because she loved me. so much. I get it now. But I still miss my mom.
Posted by Erica at 1:57 PM

i'm so glad you wrote this all down. sometimes it's hard to relive and remember. i wish i remembered more about my dad's death. but i was 11. what does an 11 year old remember? love that picture of her. just beautiful.

I can't imagine the emotions that rise just thinking back at the last moments with your mom. Love the photo-what a beautiful lady. Thanks so much for sharing, Erica.

Your mom is beautiful. Your post speaks volumes of the love you have for her. Thank you for sharing this, it gives me a new appreciation for my mom. Thinking of you and sending you hugs.

Your recollection of that memory is just beautiful, just like the picture of your Mom. Thank you for sharing! Love ya!

What a hard and lovely post. Thank you so much for sharing, it is very obvious the love that you and your mother shared, regardless of how it was expressed. xx

What a beautiful lady she was! Just like you are! Thank you for sharing this. Sending you a big hug

Thanks so much for sharing, Erica. I lost my Dad when I was 28... that was 32 years ago, and still his birthday and the date that he died weigh heavy on me every year.