Most of you know that I lost my father 9 years ago this past monday. He was 63. He passed away in Virginia 2 days after christmas in 2001. I was in California. I had made the choice not to go see him in the hospital. A choice my mom thought I would surely live to regret. I don't regret that. What I do regret is that we as a family didn't fight hard enough to get him to give up drinking.
My dad was handsome, smart (wicked smart-knew all the answers to Trivial Pursuit questions smart), funny, thoughtful, caring, hard working, and successful-the strong and silent type. He could cook too! Made hollandaise from scratch!
He was also an alcoholic. I didn't know it until I was in high school.
My earliest memories of him involve my brother and I listening to the cassette tapes he would send to us from his Navy ship at sea. He was gone for months at a time and I honestly don't know how my mom did it alone. He wrote us letters that I can still see in my minds eye-his handwriting was so distinctive. He would always ask us to "take care of your momma and be good".
He spent a lot of time in the garage with his cars (a mercedes lover), he taught me to check my oil and change my tires. He also spent some time in a tux, attending opening nights of the Opera or the symphony. He always brought us wonderful trinkets back from his work trips. He was a voracious reader and I swear he knew everything about everything. He loved silly movies-physical comedy and the really bad stuff like Clash of the Titans. He served in the Navy for 28 years; first as a commander and then Captain. He retired in 1988. I think that is when he started to get really depressed...and the alcohol closed in on him.
My mom, who loved him dearly, felt emotionally abandoned and divorced him in 1996, after 29 years of marriage-in the hopes that he would stop drinking. We all hoped it would make him stop. But by then it was too late. And he was too proud to get help.
In 1993, when I was in college, I wrote him a letter pleading him to stop drinking, I didn't want to lose my father. I used the word "alcoholic" and I think I truly offended him. And he never had the tools to communicate that type of thing well. So from 1993, until he died in 2001, our relationship was strained. I tried and tried and he just retreated further.
It's all just very sad. Im so sad he never met Ryan. He never got to know any of his grandchildren. And they will never know him! Im so sad for the life he missed out on.
But he was a wonderful father. He took care of us kids when we were sick (my mom always admitted she was never good at that!), and he taught us so much. And I miss him.
I don't have many pictures of him but I do have my parents' wedding album. So here are a few shots of the two of them on their wedding day. June 3, 1967. He was 29 and she was 24.
I miss you, Dad and hope one day I get to see you again. 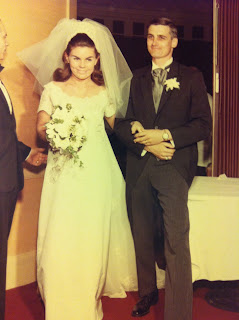 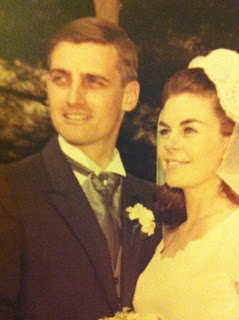 Aww...love this..it's so amazing how much you look like your mom and your bro looks just like your dad...

Oh E, that was just beautiful and thank you for sharing, even if it made me cry!

I remember a lot about your dad. I married his younger brother who thought Roland was the best big brother anyone could ever have.

Even "typical" families have their struggles. Mine was with my brother & his drug addiction. You've lived your share of struggles, friend. Thanks for sharing.

Erica your dad sounds like an amazing person, I can't even imagine the loss you feel. Your strength is inspiring, I feel so blessed to have you as a friend. Much love and sending huge hugs!

Tom said to tell you, you should become a writer. All he does is write for a living Erica, and he said your columns are very well written :)
Uncle Roland was lucky to have a daughter who cared about him, as much as you did. Sending hugs your way

I just lost my father in August. This was our first Christmas without him. I hope that my memories are as fresh 9 years from now. It's so bittersweet to look at pictures of them like this when they were so young and vibrant and had their whole life in front of them. Thanks for this post.

I love the beautiful wedding photos. I know you miss your dad...I miss mine too.