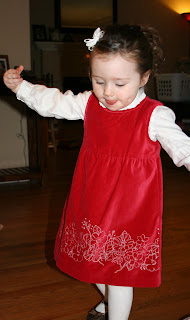 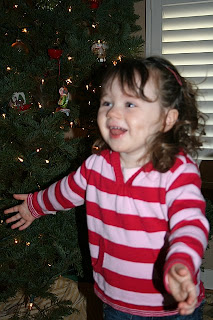 2008 brought preschool, early intervention, a flower girl job and a baby brother! At this point Avery was delayed but making so much progress! She started walking in 2008 and her vocabulary was expanding. She had a TON of words. I made a list to try to prove to the early intervention evaluators that she was just going to "catch up". I think I was also making her out to be better than she was. We were initially denied EI services at all! I was happy and bummed at the same time. like, wait! she needs help...even though I'm pretty sure I am happy you say she doesn't need it, but...wait! We later re-applied and were accepted. duh.
She also had bangs which I realize now were not the best look for her. (thanks uncle brad)
2008 was also the year I started this blog. It got a little tiresome telling the same story over and over to everyone and wanted a place where people could come to get updates on Avery if they wanted them. You see, I used to be a big picture pusher~ I would send out regular kodak gallery albums to EVERYONE in my contacts list (well almost). And after a while I realized, its possible not everyone on this list cares, has time, or even opens these things. So the blog was born. And now all of you that do care, come here.
Christmas that year was good. She played with some toys, used her left hand to put food in her mouth and still looked at the camera and smiled. 2009 would be the year that most things changed....
Posted by Erica at 12:59 PM

I am sure glad that the blog was born and that I can see the latest haircuts or silly outfit. I am telling myself that 2010 will be the Christmas when everything changed, you know, right before they announced that the IGF-1 trial is working and she would start talking and using her hands again soon. xx

I love seeing the younger pictures of Avery. She's beautiful. Yeah, 2010 has meant a lot of changes for Abby, unfortunately. I'm looking for the good changes, too. They're coming.