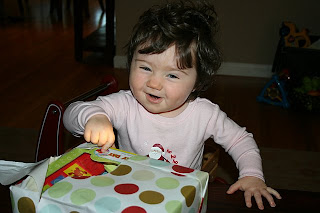 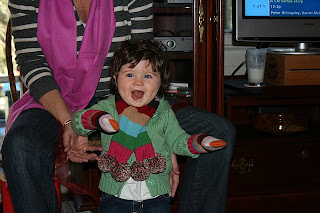 Christmas 2007 memories remind me to be happy with what you have at the time. Avery was 17 months old. We had fired her pediatrician by that time because he repeatedly blew us off at any mention of her delays. But all of a sudden at 15 months HE realized she was delayed (but was certain she didnt have any kind of genetic syndrome!). A lesson in mothers instinct-but I didnt want to believe what I knew in my heart. She was not walking, not crawling. She could walk behind a push toy though. That was cool. We had her in PT for about a month and she had promised us she would walk within 4-6 months (and she did!) She was barely pulling up and had very little language.
But looking through the pictures reminded me of all the things she could do at the time. She could point. She had a handle on several signs. She tore open her presents (with help, but she had interest). She could do the "elephant": she would make this cute elephant noise while raising her arm like a trunk. She could pose for pictures, looked at the camera and smiled. She could hold things in her left hand, she could play with bath toys, she could hold her other toys. She flipped pages of books and magazines like nobody's business.
We were so focused on all the things she couldnt do though, and only thinking about how much better it would be when she could walk/talk/crawl. Little did we know. Part of me is glad we didnt. But part of me wishes we had known about Rett syndrome and what it would later do to our girl. I know we would have appreciated it all much more at the time. Im still guilty of this now-not appreciating what she can do as much as I should. About 6 months after these photos were taken, we would go see genetics and have some basic genetic testing done. We sat in that office showing the Dr's how well she could roll a car across the floor trying to prove nothing was wrong. Rett syndrome was mentioned. The geneticist thought it was unlikely but that we could test for it if we wanted to. Because I knew what it was, and what it meant, I declined. I told him: "If she does have it, I dont want to know now. I want to enjoy her how she is without worrying about what she may lose". I wonder what would have changed had we found out at 22 months rather than 40 months? Its possible that it may have helped us enjoy her more, but I dont think I was quite ready for my heart to be broken by Rett.
She can still point. Ha ha, Rett, you didnt get everything!
Posted by Erica at 8:05 AM

LOVE these pictures. LOVE you. and I am with you...hate Rett. Nothing would have changed if you found out earlier. Well.....I would have met you sooner but that is for sure not big enough of a bonus :) I love ya Erica!!!

I think often as parents we DO only think about was ISN'T happening or worry about the future instead of living in the NOW. I love that you brought attention to the things your daughter could do!