It's been a while since I posted...even though every day I think of something to blog about! but then it just becomes a long list of things I cant remember and I realize Ill never get it all done in one sitting. So because I have to play catch up-Ill try to keep it simple and not get too dramatic or philosophical!
The last video I posted was taken on Sat. June 5th when we had another fun playdate with our friend Leah (Leah also has Rett). Leah and her super cool parents came up to swim with us. It was a blast. Lots of smiles and splashing and sharing of fruit snacks. I think Leah and her parents are used to Avery bombarding them for their snacks by now! 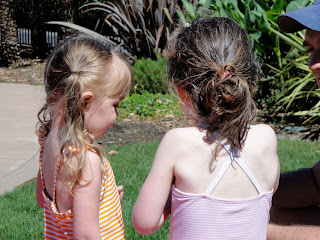 Oh, the 2 days leading up to the fun playdate are blog worthy as well. Thursday Avery was walking in her room, tripped over her own feet and knocked her two front already slightly loose teeth on the bottom of her bookshelf. ouch. Top right tooth was pretty loose. I thought for sure it would either fall out or die sooner than later. The next night, Im getting ready to go out and waiting for Avery's aunt to come and pick me up. I had Nolan on the potty and AVery was so excited for her aunt. She fell in the dining area as she was running around-hard. I went to see and there was her top right tooth on the hardwood floor. Clean as a whistle! Just popped right out! She cried-hard. Of course it was 5:30 on a Friday but I was able to get in contact with the dentist who wasnt worried but wanted to see her on Monday. We took her in and she is fine. Just looks like an 8 year old now. pretty cute. 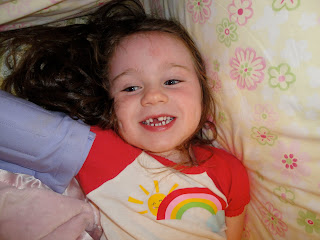 On June 12/13 we took an awesome trip down to Half Moon Bay with great friends of ours for my first golf trip ever. We played both courses at the Ritz and stayed one night there. We had a fabulous dinner with great wine and a little early birthday dessert! It was amazing. I played ok but had a blast. It was gorgeous weather and such a great break from the kids. Thanks again to Gramma for helping us out-we'd for sure go crazy without it! 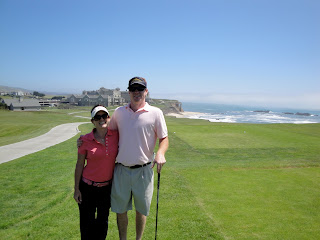 The following weekend we were busy! Friday night we had all of Red's siblings and their significant others over for dinner. It was so much fun. It's really cool that all of us get along and can laugh at each other and ourselves so easily. I cherish it. Saturday we attended a birthday party for a friend's 2 year old. It was a great party and after Avery screamed loudly until she got in the pool, it went well. A friend of mine told me that day that I was a good mom. I told her I should win an Academy Award. I then realized I would probably lose it a lot less if I constantly had strangers in my house! :) Nolan would not get in the pool but enjoyed running around throwing any ball he could find in to the pool. 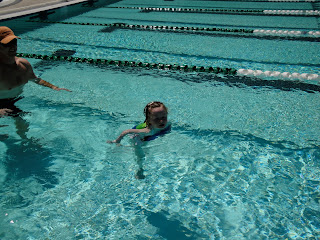 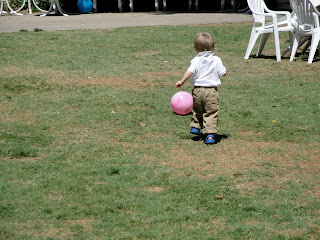 That night I got to go out with two amazing Rett mommies! Leah's mom, M, and Claire's mom C. (Yep, the same C that mailed me that awesome necklace!) They were too sweet and brought me gifts, cards and bought me dinner! oh and a yummy birthday dessert too! We talked for 4.5 hours straight-sharing stories and laughs and tears. It is so special to have these awesome women in my life. 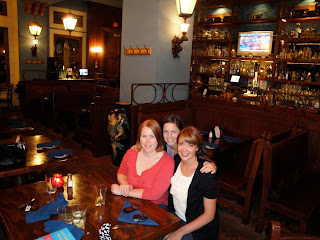 The next day was Father's Day. The kids and I spent the day with Red's Dad/family at the pool and Red played golf with a buddy of his. It was a very nice day. We love love love Daddy and Poppa!
Then is was my birthday. June 22. It snuck up on me for sure. And Avery had a bad day-which means mommy had a bad day too. A seriously BAD day. Lots of crying from both of us. Even though our new amazing sitter started that day and came from 9-12 so I could go work out-the afternoon just went way downhill. I dont even remember why or what but it did and it was BAD. I hated everything, especially myself for being such a horrific mom. Don't say I wasn't, because I was.
But then, we took Avery to Gramma's and Nolan to the concert in the park with some friends and it was a blast. (Yes, I get that maybe part of the reason I had a bad day was being mad at myself for purposely excluding Avery from the concert in the park-this was not lost on me)
Our friends brought me cupcakes and sang to me-how can I not be happy with now my 4th birthday dessert in 10 days!? It made up for the horrible day. Nolan stole my birthday hat and chowed on cupcakes! 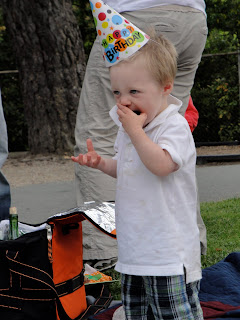 And then Wednesday was incredible. Our fantastic sitter came from 1-4 and I took Avery to the pool while Nolan napped. Aves and I had some great one on one time and I remained calm even while listening to the little girls in the pool saying just totally typical things: "I'm THREE!" "Mommy watch me!!" "I want to swim with YOU!" I helped Avery swim and sat close to her while she ate a popsicle off a stick I had to hold for her-we spoke softly and pretended no one else was there. We both did great. I came home to meticulously folded laundry, tidied toys (inside and out!) and a scrubbed stove. Man that feels good. wow.
Friday we started Avery on Tenex. We have seen some changes-not all great but we are thinking we are on the right path to getting her a little slowed down and focused. Hoping it will be a little more stable by the time summer school starts (8 days and counting!!!!!) More on this later-my wireless connection is a little iffy at the moment so I better stop here.
Posted by Erica at 9:46 PM 7 comments:

It's easy to feel isolated and alone when you have a child who is "different", none of your friends can really understand what you go through and there are moments-the dark moments-when you feel as though you are the only person on the planet going through this hard time.
then you walk into a room filled with 99% parents of children with rett syndrome and you can say "ahhhhh. Im not alone. look at all these moms and dads and grandparents who are walking the same path" Its an awesome feeling. I cant say that I felt this right off the bat when walking into the ballroom for the 1st session. We were late and I hate being late. So I had that on my mind, but guess what, other people were late too! We found C and J who held our seats and got down to business taking notes-not sure if what we were writing was the important stuff or not! I didnt feel the feeling until we were seated at the tribute reception later that night. Sitting with new friends and surrounded by our rett family that I felt a calmness and peace wash over me. I really did. My new friend M, who we had been hanging with the day before leaned over and said something about it being crappy circumstances but that she was really glad they met us. And I really was too. Another mom had said earlier that you can go to a conference where everyone is there for the same topic but its not like this-there is an instant emotional connection. All of our stories are so similar. And we dont have that awkward moment where someone says "oh you have a 4 yr old too? Is she into Dora and princesses and just talking up a storm??" and you have to say "my daughter has a disability" and the other mom gets all awkward and weird and then the connection is lost. This time it was more like "whats your daughter's mutation/deletion?" -"Really? Thats so similar to Averys! wow, let me get your email!"
So that was the biggest thing I took from the conference-it's going to be OK. It really is. We have the BEST people walking with us on this path and great friends and family as well. And we have been inspired and giving an extra dose of hope. im really starting to live like Avery will be cured. I want her to be a freshman in college and tell her new friends "I had Rett syndrome when I was a kid, but they fixed it". How cool would that be? I think it WILL be her future. I have to right?
Posted by Erica at 2:55 PM 7 comments: