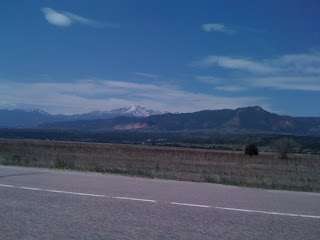 I have procrastinated long enough. Im worried I wont do the information in this post justice but here goes.
Most of you know Ryan and I attended our first Rett syndrome conference this past weekend. It was in Colorado Springs this year. Oddly enough last year's conference was held in Leesburg VA where one of my best friends lives and is also the state I grew up in and still have family in. Of course we missed that one because we didnt "have" Rett yet! Anyway! Colorado was great. We have great friends there as well and were treated to a lot (free place to stay, free car and a very generous donation of miles for our tickets!)-plus we finally got to meet their cute kiddos ages 3 and 1. They really know how to take care of their guests. Still trying to figure out what to send them to thank them!!
So we arrived Thursday night in Denver and took the shuttle to our friends place which is about an hour away. It was late and there were 3 other groups in our van. First guy got dropped off no problem. The second group wasnt so lucky. Driver got lost despite having a navigation system! Seems the company got the address wrong. So that made us next. By this time we both had our iphones out to check the map ourselves. The driver makes his way to the neighborhood (which we have been to once but our friends have since moved houses) and just as he passes the court they live on says "here it is". We are sitting in the middle of the street. Literally. He hasnt pulled up to a house at all, just stopped in the middle of the street! I say from the back "Um, no, I think it's back there on that court you just passed". Driver: "you don't know the house???" Me: "Ummm, nope never been here before!" We had been worried by the small amount of cash we had for a tip. Turns out it was just the right amount for this guy!
On Friday we got on the road to the springs. Just about an hour drive and it was pretty looking out at snow capped mountains. After we picked up our registration materials we ran into another couple who we had met at another Rett event who live in Santa Barbara. We had a feeling after that first meeting that we would just click with them and we did! We had lunch with them, shared our diagnosis stories and chatted. Another mom I had met at that same fundraiser came in and joined us.It was great. then we headed to the pool for some beers and some rays. More families arrive-I got to meet a couple from VA who I was introduced to via facebook thru a mutual friend! Small world story there. Then we headed back to our friends place for dinner. It is always so great to catch up with them and have a relaxing dinner. There was a raccoon in a tree on the deck of the restaurant -if you know Red's past with raccoons then you know we were hysterical laughing. Saturday morning we were up early to head back to the springs. We were running late so I had another awesome mom and her hubby save us some seasts! Thank goodness we could just sneak right in the back! Thanks C and J.
the first two sessions were Rett syndrome 101 and Genetics 101. It was a bit early for genetics but helpful. It's going to take me a while to really get the genetics part. I am so interested in this and yet most of it goes over my head. Dr. Skinner, who we saw at Katie's Clinic, presented the genetics piece. He has a good way about him that does make it easier to get. I learned what all the letters mean in many of the mutations and sort of get the difference between missense and nonsense mutations. But Avery has a deletion. But that's another story!
Next was the keynote. Susan Zimmerman is a Rett mom and author. This woman has a gift. A gift for words and for public speaking-two things I wish I had a better handle on. Her daughter is now in her 30's so it was much different when they received their diagnosis. She began writing and realized she had a book. The book is called Keeping Katherine and I need to read it! I inteded to buy it right then and there but didnt get the chance. She relayed a story about an experience she had during and outward bound trip. A young woman from New Orleans was rock climbing, something she had never done before and was stuck at the top just about to reach the end. She froze. they all began yelling to her that she could do it, go this way and go that way. The the outward bound leader shushed them and yelled to her "if you cant get OUT of it, get IN to it!" chills. she also told a story about arriving in NYC the day after the new york city marathon just after 9/11 and seeing a woman finishing the race-a day late. A true winner. she never gave up.
both just reinforced where we are. We cant get out of having rett syndrome in our lives. So we are getting into it. Working on a fundraiser, going to the conference, learning as much as possible. It was an incredible speech.
It's becoming clear to me that this has gone on too long for one post and there is chocolate to be eaten. More to come!
Posted by Erica at 9:24 PM

I too was so encouraged by the speakers Saturday morning. After being reminded about what Rett Syndrome really is I am so much more motivated to give Claire everything in this world that I can. And on another note, I would like to buy a vowel :-)

it sounds like you had a great time! I have been meaning to email you about "Keeping Katherine"...I recently read it after seeing that it was a book suggestion on a Rett website. It really had a HUGE impact on me :) Shoot me an email with your address and I'll mail you the book!

'Keeping Katherine' is a great book. It was the first book I read about RS after Amy was diagnosed. I really liked Susan Zimmermann's quote 'If you can't get out if it, get into it'. I was going to use it as a blog-heading too, but you've beaten me to it!

Catriona-you can still use it! its too good not to use!
Dawn-and email is on its way!
Colleen-I seriously crack up about 7 times a day when I think about that!

Oh man! Wish that the RS conference was here every year! Sorry for cutting you off yesterday...had to log on here tonight to "finish" our convo..sounds like you got a lot out of this...keep writing...love this and love you bear