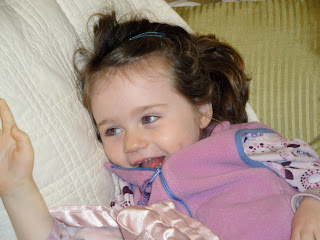 Avery used to make a c/k sound for some word approximations she had before-like clock and clown-which were the same but she stopped using words with that sound in the beginning. She says Okay, or just K all the time. but lately-when pointing out my car-which she has always called Guh (which is what she also calls Gramma)-she has been saying Kuh instead! you can tell that she is testing it out too. On the drive home from the gym I kept looking in my rearview mirror to see what she was trying to say b/c I just kept hearing kuh, kuh, kuh. she was SO proud of herself.
Slowly but surely, she is adding words to her vocabulary! It is super exciting!
Posted by Erica at 10:19 PM

Such joy, I am glad that you are soaking in the beautiful sound of her voice. That is truly exciting that she is playing with sound so much!

Go Avery! How cute is that! She's kicking Owen's butt with vocabulary..

I hope he catches up!

I was wondering if you ever considered changing the structure of your website?

Its very well written; I love what youve got to say.

But maybe you could a little more in the way of content so
people could connect with it better. Youve got an awful lot of text for
only having one or 2 pictures. Maybe you could space it out better?