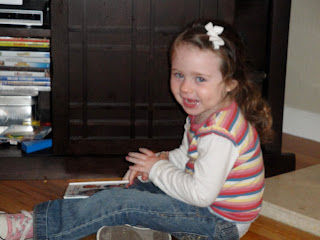 I've always hated odd numbers! Always!
I spoke to the genetic counselor today-she is awesome. The (odd) numbers above represent Avery's MCEP2 mutation. She is one of a kind (but we already knew that)-this particular mutation hasn't yet been reported. Basically she is missing 23 base pairs or nucleotides on one arm of MCEP2. The ones between 917 and 939. weird huh? We were told that some of her X's that have the mutation were turned off during gestation and some were turned on. So she has some "good" X's at work in there! The good part about not having anyone to compare her to is that the sky remains the limit! The bad part is not having anyone to compare her to! But, even if there were another girl with this same deletion-they wouldn't necessarily be alike. Depends on how many "good" x's there are.

Still waiting on the new neuro, but heard from the pediatrician today (who we love) and she said she would call the one we will likely be assigned to. She says he is great. We have every confidence that he will be!

I will be getting the lab slip for my genetic test next week and will likely go in after thanksgiving. Then we will find out if I have the Rett mutation on my inactive X. Highly unlikely but I am not ruling anything out at this point. Then we decide if there will be a baby #3!

Gotta go make dinner. Chicken fajitas. Wish I could have a beer! Tomorrow is the last day of my month off alcohol! 8-9 pounds lost!! :)
Posted by Erica at 7:02 PM